I have a story out in the first issue of a new lit mag, A Million Ways. The story, titled Everybody’s Waiting, is – perhaps typically – somewhat morbid. You can buy a copy from the mag’s Facebook store.

Thanks to Dan Hancock and the team at A Million Ways. They’ve done a great job putting together a beautiful little magazine, which I know must have been no easy task. You can read more about Dan’s inspiration for the mag in an article he wrote for the Dorset Writers’ Network.

I found out yesterday that my story, Josef K was not on Facebook, was shortlisted for The London Magazine’s 2017 short story competition.

This is great news and very encouraging. You can see the full list, including the prize winners, on TLM’s website. There are some very intriguing titles in there.

Thanks to the TLM judges for the shortlisting.

There’s a detailed and pretty even-handed review of the latest issue of Popshot up at the website of the new UK Lit Mag Review, including a couple of paras about my story, Last Light.

The site promises to review a new UK (or Irish) literary magazine every week.

Often it feels as if new issues of small magazines appear and then vanish without a trace, which is a shame as they often contain some quality fiction and deserve to be talked about. This site should help correct that.

Looking forward to more reviews as they appear.

Issue 18 of Structo has arrived, and the publication is looking as beautiful as ever.

Inside, there’s a an illuminating interview with Daniel Handler (aka Lemony Snicket) as well as some great fiction.

I particularly enjoyed Emma Sloley’s Schadenfreude Season, about a washed-up former child star and the invasiveness of celebrity culture. It’s one of those stories with no rough edges, that knows exactly where it’s going and takes you there with total confidence.

Ross McCleary’s A Fear of Flying Sleep was also impressive for its incessant parade of terrors. It’s a veritable thicket of anxiety and existential angst.

I am honoured to be in such company.

I have a new story out in the latest issue of Structo magazine, titled The Machine Room. It’s kind of a paranoid, claustrophobic little piece.

Structo is a biannual UK literary magazine. It’s been going since 2008 and is one of the best lit mags out there.

Copies can be bought from the Structo shop.

I have a new story, titled Last Light, in the Autumn/Winter 2017 issue of Popshot Magazine. Popshot is a beautifully presented print journal that brings together writers and artists, with each story and poem sitting next to its own specially commissioned  illustration. It’s a fantastic way to offer up new fiction. I’ve had my eye on getting something in Popshot’s pages for a while, so it’s great to finally make it. I struggle a little with writing to a set theme, and each of Popshot’s issues is themed. This one’s about ‘light’ and my story concerns an inventor who has seemingly found a way to stop light itself. Copies can be bought at the Chelsea Magazine Company shop.

Many thanks to editor Jacob Denno and to Nick Taylor, the artist who did such a superb job illustrating my story. Popshot is going quarterly next year, so it’s clearly going from strength from strength. Subscribe here!

I have a new story, Lights Out With A Click, in the latest issue of online magazine CartridgeLit.

The story is told from the perspective of a character in a computer role-playing game modelled on 1987’s Dungeon Master. Existential angst meets 1980s CRPGs is a bit of a niche market, but hopefully you don’t need too great a knowledge of the genre to appreciate it.

Dungeon Master starts with the player outside of the dungeon, with the only option being either to quit or to open the door and step inside. As a young player, what I most wanted to do was to turn around at this point, to explore the area outside of the dungeon, to disappear down whatever forest path had led me there, to be free to wander the world that the dungeon was part of. That doesn’t seem much to ask in the era of sandbox games, but even Skyrim has its invisible borders. Anyway, that’s what the story is about: borders and the yearning for something beyond.

CartridgeLit itself is a fantastic lit mag dedicated to fiction, poetry and essays about video games. It’s committed to treating games as cultural objects worthy of appreciation. It was the perfect home for this story.

In October-ish I’ll have a story out in Structo magazine. It will not be about video games.

I’m very fortunate to have had a piece of fiction, the e-Shadow, published on the website of The London Magazine recently.

The story was inspired by the old Hans Christian Andersen fairy tale, The Shadow, updated to the present day and with the addition of the now-ubiquitous social media.

The story is available here. Many thanks to TLM’s Rachel Chanter for her help and suggestions for improving the piece. I’d also recommend reading the original Andersen fairy stories, if you haven’t already, as they’re always fascinating and frequently inspiring.

I have a new story, ‘The Veil of Stars’, out in the latest issue of Lighthouse.

The story uses space travel as an extended metaphor for dementia. It’s a change of pace from the other two stories I’ve had out this year and, in terms of the quality of the language, I feel like it may be the best thing I’ve written – certainly the most sustained and successful conceit I’ve attempted.

Lighthouse won the ‘best magazine’ category at the 2015 Saboteur Awards so it’s fantastic to have a story placed there. I am grateful to the editors for accepting my work.

Copies of issue 12 can be bought here.

Finally got my hands on the latest issue of Broken Pencil, featuring my story, Now I Am Become Ken Burns, The Destroyer of Worlds.

It’s been a long wait, but it was worth it. Someone has produced a brilliant illustration to go with the story (see below) and the whole thing looks fantastic. The title has been shortened for the opening page, but as a subeditor I’m sympathetic to people dealing with overly long headlines.

The issue also contains the other three finalists from the Indie Writers’ Deathmatch, the winning Moulting, by Madeeha Hashmi; Louisa, by Andi Schwarz; and Ryan Power’s Jean-Claude Van Damsel in Distress. So that’s a lot of quality fiction!

Also included is a write-up of how the Deathmatch unfolded, not quite a blow-by-blow account but it captures the awful horror, violence and bloodshed of those fateful few weeks in the ring and the (inevitable) Hashmi victory.

All in all, it’s a quality issue. Go buy it at the online store. Or if you’re lucky enough to live in the liberal dreamland of Canada, maybe even an actual store? 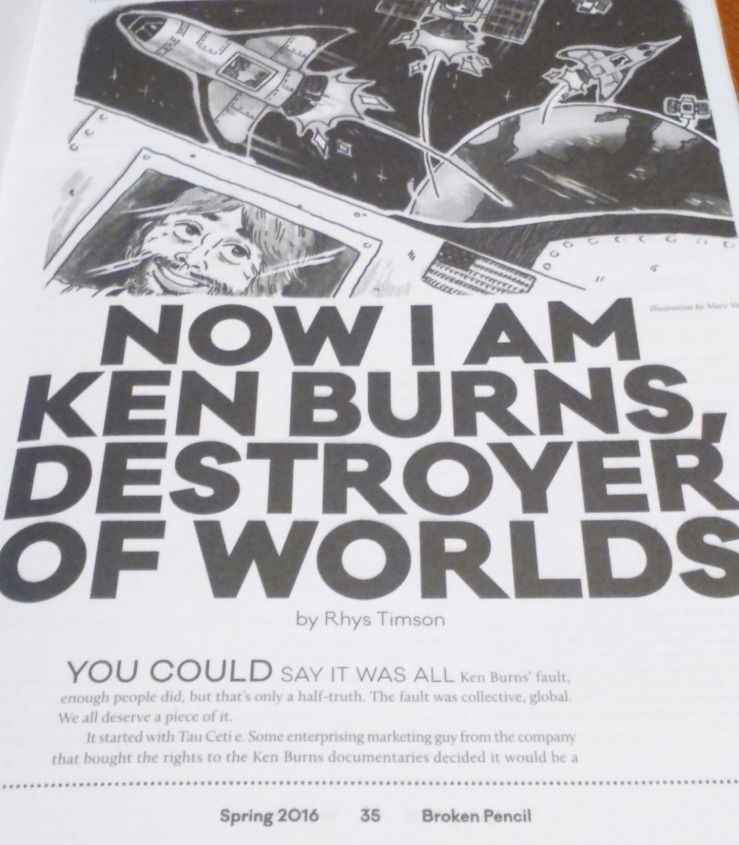